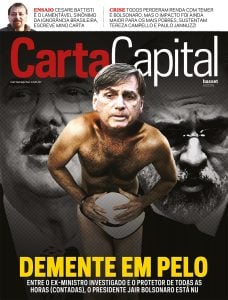 In Northern Brazil’s fertile Amazon region, a movement of landless farmers is struggling against the agricultural giant Santa Barbara

PARÁ, Brazil—Every Sunday, 60-year-old Conceição Carmo da Silva proudly sells freshly grown vegetables and spices at a local market in Northern Brazil’s poor Marabá municipality. Her organic sprouts, lettuce, arugula and spices are all raised without pesticides, and they’re popular among the local clientele, who often leave her sold out and packing her bags to go home by 11 a.m. Still, Carmo da Silva is never sure she’ll have work the next day.

With her son, she lives alongside 300 other farmer families who are part of Movimento dos Trabalhadores Rurais Sem Terra, Brazil’s Landless Workers Movement, known widely as MST. They say they have a right to live and work on these fertile lands—long their source of food and livelihood. But the land officially belongs to Brazil’s powerfulAgropecuária Santa Barbara Xinguara S/A (Agro SB), an agricultural corporation controlled by Daniel Dantas, the nation’s largest cattle producer.

Now, the company wants the farmers off the land, and it’s waging a fierce legal battle with high stakes. Farmers claim that losing that struggle would have consequences on Brazil’s food supply, resulting in less food produced and more grown with pesticides.

“We try to produce healthy food, but we are suppressed and ignored,” says MST leader Doraci Alves de Melo, in Marabá. “If we don’t produce it, who is going to eat healthy food? No one.”Historically, small, peasant farms have been crucial to the nation’s food supply. Data from the latest agricultural census shows these farms produce the largest share of food consumed in Brazil—70 percent of the country’s black beans, for instance, and 83 percent of cassava, the main ingredient in Pará’s cuisine.

Pará is changing, however. Five times more of the state’s land is now used for cattle production than for food and crops, according to the Brazilian Institute of Geography and Statistics. As a result, the majority of food sold and consumed in Pará comes largely from outside the state.

It’s a trend across the country. In recent years, Brazil has begun importing staple foods, like black beans and bananas, from China and Thailand.

In 2008, MST says 1,000 of its workers occupied a cattle farm owned by Agro SB, arguing that the company’s use of the land was not in accordance with criteria set forth in Brazil’s constitution and laws. Over the next two years, the group says it occupied two other Agro SB farms, part of a larger trend across the country.

Inspired by left-wing leaders in the Catholic Church in the 1970s, MST has long struggled for poor workers’ access to land and defended safe, natural farming practices. In the encampment, workers use traditional peasant techniques, such as harvesting seasonal crops and applying only natural fertilizers. In the country that is now the world’s largest pesticide market, they argue that pesticides damage the environment, as well as those who eat and handle them.

José Batista Gonçalves, a lawyer representing MST, says Agro SB does not adhere to Brazilian environmental legislation and has a reported history of slave-like conditions for its workers.

He also says that the land that MST is occupying is unproductive, meaning that it doesn’t produce by Brazilian legal standards.

According to the Constitution, land that remains unproductive should be used for a “larger social function.” Brazilian legislation mandates that the land should revert to state ownership and be redistributed among poor farmers.

“Today, the state could recall a large part of these lands,” Batista Gonçalves says. “But there is connivance between these large landowners and the state of Pará, so public land is being illegally appropriated by large economic groups.”

According to a 2013 study by the Pastoral Land Commission, a Catholic institution that examines land ownership in Brazil, much ofAgro SB’s land occupation is illegal. The study looked at four of the company’s 50 farms and concluded that more than 70 percent of the land was public.

Agro SB denies all such accusations. Spokesman Altair Albuquerque wrote that Agro SB is “the legitimate owner of all their farms, acquired transparently and rightly.”

He also said the company is a “fierce advocate of due compliance with all labor rights” and provides a career plan with several benefits, transportation and schools for both children and adults.

Albuquerque told Journalists for Transparency Agro SB searches for “a peaceful solution to the land question, keeping a systematic dialogue with the government authorities responsible for land reform and the quality of life of rural landless workers.”

That is hard for some Brazilians to believe, however, because of the company’s ties to scandal-plagued owners.

Opportunity Fund, an investment fund founded in 1996 in the Cayman Islands and partial owner of Agro SB, was accused by Brazil’s Federal Police of large-scale fraud in the privatization of the telecommunications sector during the late 1990s. The group has always denied the accusations and criticized the police’s handling of the investigation.

Daniel Dantas, the group’s primary owner, was sentenced to 10 years in prison in 2008, after being found guilty of attempting to bribe a police officer investigating corruption in the telecom industry. Dantas denies wrongdoing and his sentence has been suspended while the case is on appeal.

Following these scandals, Opportunity Fund shifted the focus of its business, trading the communications empire for large cattle farms in the country’s interior. It made about U$1.5 billion in investments in Agro SB between 2005 and 2008,according to Rubens Valente’s book, “Operation: Banker.”

MST peasants say their determination to grow crops is in response to the alleged corruption surrounding Agro SB, and farmers say they will not back down, even in the face of danger.

“We fight to show society just how crazy it is to see something that you know is yours being taken from you,” Alves de Melo says. “We only have the right to eat because we make our own food.”

Residents say the farms they’re working are ringed with heavily armed guards that threaten MST members. The land movement told local media that in 2012, a conflict between guards and landless activists injured at least 12 people whose identities were not released.

Residents also tell of planes hired by Agro SB that spray pesticides on their crops. The reporting team tried on multiple occasions to contact the farm’s headquarters, but was not received by Santa Barbara managers.

By e-mail, the company wrote that these complaints are “groundless.”

“The AgroSB is surprised by this assumption and has never used this type of practice to harm anyone,” wrote Albuquerque.

But MST lawyer Batista Gonçalves says Agro SB is operating with impunity, which he says is a consequence of the company’s influence over the Brazilian government and judiciary system.

“We know that there are illegalities in the process of acquiring properties by the group here in the state of Pará,” he says. “So, what should the state do? Investigate. Does the state investigate? No, it does not.”

*Chalk and Locatelli are reporting for Journalists for Transparency, a collective of journalists and storytellers, incubated and funded by the International Anti-Corruption Conference.